There are days that I just love to hate people. I dwell on the wrongdoings of my fellow man and become red with anger. It usually starts on the way home from work. After a long hard day in the office, I find myself both tired and drained. All I can think of is the chair in the living room at home, with an ice cold cup of water, some Cheetos and the remote in my hand. All that’s standing between me and that heaven is 16.8 miles of traffic and every cell phone talking, slow moving, cut off driving, texter out on the road. I inevitably find myself on the wrong end of someone’s lack of focus—and that’s when the anger hits. “If they would just…” is my go to phrase. I hate it. At this point, the thought of loving my fellow human is repugnant. It feels as though I could no more love my neighbor than fly.

I don’t know if you have siblings, but I do; Two younger, bigger, stronger ones. My brothers are good at a lot of things. My middle brother is the most socially and emotionally mature and wise person I know. His ability to empathize is both a miraculous gift and covet-worthy. My youngest brother, though, is the one I want to talk to you about today.

Lucas, also known as Luke, was born in a rather tumultuous way. He was brought into the world through cesarean section and for that reason gained the namesake of Luke, the biblical physician. In the last couple of decades, Luke has grown from my rather obnoxious younger brother into a man that I respect and look up to in many ways. His dedication to being the best at what he does and his earnestness in living are two characteristics that I admire about him. But, his ability to love people is the characteristic that I admire most about him—by far.

Luke’s ability to love has not always been something that I like or appreciate. Being a bit of a touch-me-not, experiencing his hugs has historically been a put off.  Though, in recent years, Luke, has become significantly stronger than me and as such I have been forced to concede to his bear-like constrictions. Thankfully, his heart is to love not to hurt, so usually I escape before suffocating.

Roman is a family friend and is one of those man’s man kind of guys. He works with his hands, knows about sports, and has quit a large stature. My family would meet with Roman on a regular basis, and early on Luke’s love was at work. Week after week, Luke would greet Roman with a bear hug and a giant smile. In the beginning anyone who knows anything about body language could tell that Roman did not like it, but as time went on it seems like Roman grew to enjoy it. In fact, one night Luke didn’t show up to greet Roman, and so roman asked where he was because he was looking forward to his bear hug. There had been a whole heart change, from finding Luke’s love irritating, to looking forward to it when he walked in the door.

Love is transformational. Roman’s story is just one of many. Luke’s love often finds people in hard places and lends a comforting shoulder. Luke has told us of friend-hugs and boss-hugs and co-worker-hugs. It’s no mystery to me that God has used Luke’s heart to do some cool kingdom work. I admire the courage it takes to love someone who does not want to be loved. I admire the heart of obedience and the willingness to use a gift that God has given to bring Him glory.

Loving people into the kingdom was Jesus’ method. Looking at scripture, most if not all of the time, Jesus loves the person first and then he shared his message. Love was always the conduit through which the message was shared. I think this is how we as Christians ought to be living. We ought to be sharing this type of unapologetic-Jesus-love in the same way that Luke does.

What would it look like if instead of loving to hate people; I loved to love people on the way home from work? How would it feel to see people as potential objects of affection instead of as obstacles in my way?  What would people think of Christians if more of them lived like Lucas and loved people like Jesus does? I think that this love could change the world. 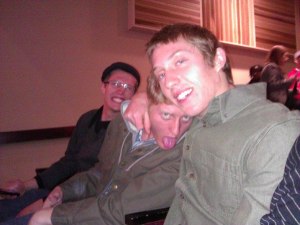