After being in the bush for so long, the plastic chair felt like a lavish couch. It had been a long day of travel. Our morning had started early and the day looked like it would extend several hours past sunset. We had reached our destination by the early evening but it was just the first leg of our journey back to Gitamilanda and our Hadzabe brothers and sisters there. We were eagerly looking forward to being reunited with them and finishing our discipleship material. But, as for this night we would be staying here, at the school in a 1 horse bush town. Our host was the principal, H’amos. He had welcomed us into his home to eat a meal with him and his family. We had been given the plastic chairs to sit in while we visited with him and shared what God was doing.

We told him of the Hadzabe in Sungu, and how they had eagerly accepted the message of Jesus. We told him of the healings that had occurred and of the people who had decided to follow Jesus. He was excited to hear of our news being our brother in Christ. He shared with us about the school and his family. He told us of his church and of his home town. He also told us of a blind man in the town; hearing about what God had done in Sunegu with the healings must have  brought the man to mind. He asked if we would pray for him, we told him yes we certainly would. He said I will bring him later tonight.

As the evening progressed, we ate a meal together and continued to rest and visit with our friend H’amos. Around 9pm Johana arrived, guided by a woman who took care of him simply out of love for her fellow human being. Johana was a slender man, with an average height. He wore a pair of plastic sunglasses which were missing half of the frame. His demeanor was full of humility, and kindness and patience. He spoke softly but not in a defeated way. He was confident and faithful. His movement was slow and precise; clearly the movements of a man who had learned you can never be too careful.

He told us his story. How he was born blind: unable to see anything. Everything is dark to him. He told us of his current way of living, how the town loved him and helped him. He told us of his love for music and rhythm. After getting to know him a bit, Raymond, our co-missionary, asked Johana to remove his glasses. As he took of his glasses it became very apparent why Johana could not see. His eyelids were sealed shut except for a small horizontal slit at the bottom of each. The slit was a surgical cut by doctors to attempt to help Johana to see. The slit did not reveal an eyeball, but rather thin red skin, and muscle. I am not sure if Johana had a developed eyeball that we could not see or if he simply never developed eyes in the womb. Either way, Johana could not see.

H’amos said we should go inside and pray. So we did. A whole group of us ventured indoors. And we began to pray and we prayed and we prayed and we prayed… and he would say oh I can see a shape, oh I can see a dark spot and a light spot. But, then that would go away. And I can’t explain why God does and does not do what he does; why his healing is so accessible to some and why others simply don’t experience it. But Johana did not experience healing that night.

When we had finished praying and Johana did not see there was a palpable sadness in the room. It was most apparent on Johana, who’s quiet but courageous demeanor had sunk into sadness. As I looked at him I felt God nudging me to say something, but I had no idea what to say, so I argued with God. After a few minutes of not much being said in the room, God gave me the words, so I got up and went over and sat next to Johana. I took a beaded bracelet off my wrist (the bracelet uses a piece of letter as the structure and then a couple hundred glass beads to make a design). I took Johans’s wrist and said, ‘I want to give this to you as a gift, my friend.’ And then the Holy Spirit gave me this to say, ‘Johana, I want you to run your finger over the beads of the bracelet and I want you to notice how all the way around the bracelet there are beads. This is like God’s love. No matter where we are in life God loves us, and his love is continual. But I also want you to feel the different shapes of the different beads. Some a bigger, some are smaller; some stick up and make the surface as a whole bumpy. This reminds me of how Sometimes God’s love feels different. Even though his love is always there it doesn’t always feel like we expected, it doesn’t always feel like we were hoping, but it is there all the same.”

Johana heard what I said and he thanked me for the gift. We hugged and then I returned to my seat. He and I, sat quietly as the others talked. I noticed though, that as we listened, Johana continued to run his fingers gently over the surface of the bracelet. I prayed in that moment that he would be feeling God’s palpable love for him. 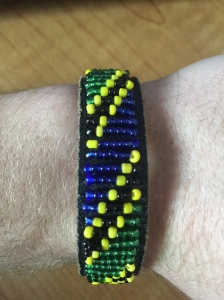